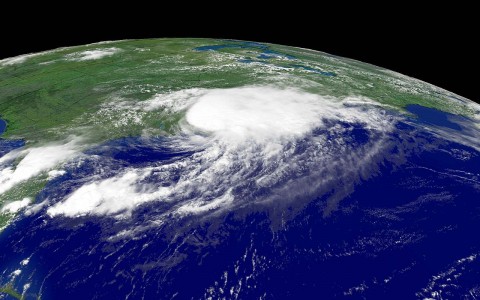 ATLANTA— Ten years ago, Hurricane Charley’s arrival on the Florida shore kicked off an unusual string of four devastating hurricanes that hit the state within seven weeks. Florida was the first state to be struck by four hurricanes in one season since Texas in 1886. Hurricane Charley, the first of the four in 2004, is remembered for its wind speed and force. Hurricanes Frances, Ivan, and Jeanne bore their own distinct characteristics: Jeanne rambled across the state causing near-record flooding; Ivan was the most powerful, and Frances caused the most widespread destruction because of the 23 tornadoes it spawned.

Tropical Storm Bonnie struck south of Apalachicola hours before Charley made landfall, the first time a state had been directly affected by two tropical cyclones on the same day.

Fast-moving Charley landed on Florida’s west coast and hit Punta Gorda on Friday, the 13th. Charley had peak winds of 150 mph as it came ashore, and sped through Orlando and across the state with wind gusts in excess of 106 mph.

Power outages lasted days, and in some cases, weeks. Many Floridians lost the roofs of their homes due to Charley’s powerful winds.

At the time, Charley was the strongest storm to strike Florida since Hurricane Andrew in 1992 and it left behind an estimated $15 billion in damage.

$209 million to 116,789 applicants through the Individuals and Households Program. This included nearly $92 million to pay for lodging expenses, rental assistance, and minor home repairs;
More than $344 million to provide manufactured housing where insufficient housing resources were available to survivors;
Nearly $18 million for Disaster Unemployment Assistance to help people who were otherwise ineligible for unemployment compensation, such as farmers and self-employed individuals out of work as a result of the disaster; and
Nearly $5.3 million for crisis counseling.
FEMA also provided $609 million for the repair or replacement of public infrastructure and public utilities, including public parks, and some private nonprofit groups, and emergency protective measures. Of this amount, $288 million helped cover the costs of removing 18 million cubic yards of debris scattered by Charley.
So far, FEMA has provided more than $81 million in funding for projects to help reduce damage from future storms. More funding may be forthcoming as FEMA continues to partner with the State of Florida on recovery from Charley.
The U.S. Small Business Administration provided:

Nearly $308 million in low-interest disaster loans to renters and owners of 11,287 homes;
Nearly $199 million to more than 2,141 businesses.
Hurricane Charley brought long-term power outages and wind damage. Take time now, before the next storm, to check your roof for any necessary repairs and have emergency tarps to cover roof damage or to protect personal belongings. FEMA has developed a series of publications to help you protect your property from high winds. You can find them here. Batteries and other emergency lighting supplies belong in everyone’s emergency kit. You can also find a useful guide to preparing for hurricanes at FEMA’s America’s PrepareAthon!

“Each storm teaches a lesson,” said FEMA Region IV Acting Regional Administrator Andrew Velasquez III. “When the people who live and work in hurricane-prone areas apply those lessons to prepare for future storms, they strengthen their resiliency.”

After you’ve taken steps to prepare your home, inspire others: Share your plan and how you prepared with a friend or neighbor.

Visit www.ready.gov or www.listo.gov for more information about how you and your family can be better prepared for the next disaster.

FEMA’s mission is to support our citizens and first responders to ensure that as a nation we work together to build, sustain and improve our capability to prepare for, protect against, respond to, recover from, and mitigate all hazards.